A Film by Stephen Seemayer
and Pamela Wilson 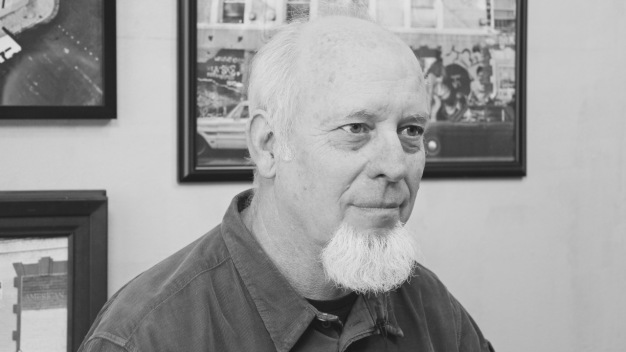 In 1978, James Duck moved into a Downtown L.A. studio — illegally, as so many artists were doing at the time — and quickly met up with four other recent transplants with whom he would form a band and forge lifelong friendships. The Party Boys — with a raw, tribal sound and wicked sense of humor — were the first headliners at Al’s Bar in 1980, becoming a legend of Los Angeles punk. Along with Duck, who played guitar, the Party Boys included frontman Donald Dunham, bassist Marnie Weber and drummers Fred Arbegast and Gillean McLeod. Their music is a large part of the "Young Turks" soundtrack.

Duck was interviewed in February 2014 for the film “Tales of the American,” a documentary about Downtown Los Angeles, Al’s Bar and the American Hotel. He now lives in Mount Washington and fronts a band called the Jimbonaires, whose songs reflect Duck’s lifelong love of surfing.

Filmmakers Pamela Wilson and Stephen Seemayer interviewed more than a hundred artists, musicians, writers and others who lived, worked and partied in the community around the American. They are periodically releasing (in alphabetical order) edited versions of these interviews on the YouTube channel Tales of the American Interviews (SUBSCRIBE!)

Click here to watch "Tales of the American" on Amazon Prime 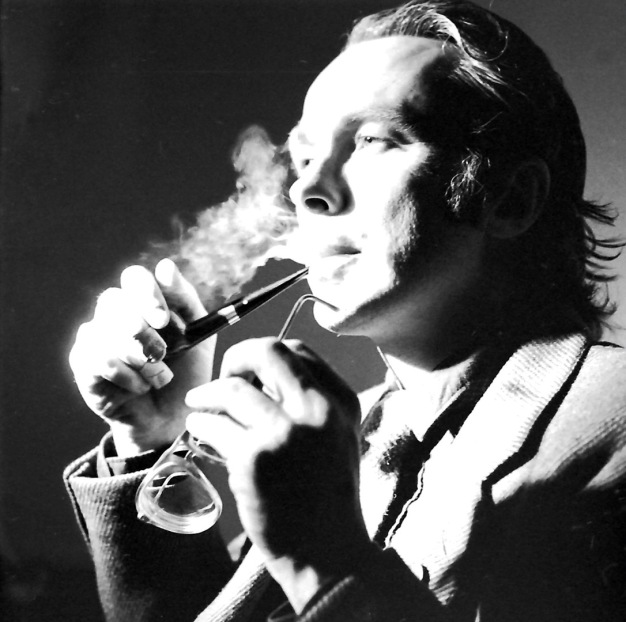 When artists began moving into the abandoned warehouses and factories of Downtown Los Angeles, Jon Peterson was among the first to see the potential for a thriving artist community in a part of the city that had long been neglected.

With a degree in Aeronautical Engineering from the University of Minnesota and a Master of Fine Arts from Otis Art Institute/Parsons School of Design, Peterson complemented his new surroundings in the late 1970s and early '80s by creating what he called "bum shelters" and placing them in the environment around his downtown loft. At once functional and sleekly beautiful, the sculptures were appreciated differently depending on the context in which they were viewed. 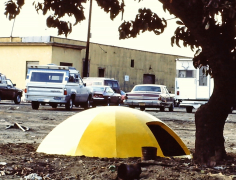 'When it's out on the street, it's like a throwaway, but when it's in a gallery, it becomes a precious object. So it kind of reflects society itself.'

Peterson, who also was an advocate for the Artist in Residence ordinance which allowed for the development of legal lofts in what is now known as the Arts District, died after a long battle with cancer on March 4, 2020, at the age of 74. 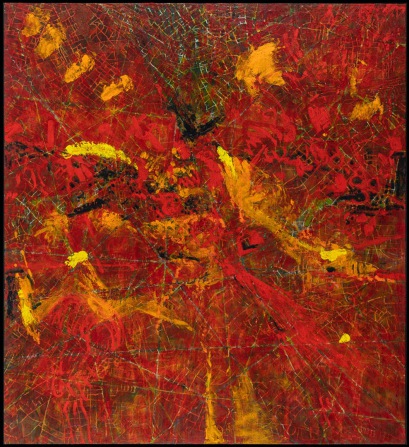 After many very successful years developing affordable live/work spaces for artists in Downtown L.A., Peterson returned to painting in 2005 at his studio in Pasadena. L.A. Artcore staged a retrospective of his work in 2013. In 2018, two exhibits — one at AndLab and another at L.A. Artcore — focused on his paintings, the subject matter of which ranged from portraiture to abstract.

He is survived by his wife, Toy, and their son, Raymond. Services are pending.

'The Dark Album' by The Dark Bob Debuts 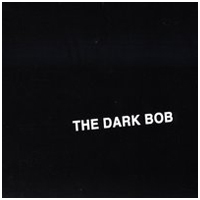 The Dark Bob has debuted "The Dark Album," the sixth solo collection by the seminal Los Angeles performance artist. “The Dark Album” features 23 songs in a variety of musical styles that artfully combine the Dark Bob's brooding thoughtfulness with his exuberant wit.

"A Million Views," for example, playfully skewers social media "influencers" who find instant celebrity without the once-venerated work ethic in which artists had to "pay their dues" in order to achieve fame and fortune.

It's been written that this album "explores themes of remorse, renewal and redemption. It's an elegy of sorts to the arc of the artist’s life." But that arc has included a persistent sense of humor and wonderment, and those qualities gloriously shine through.

"The Dark Album" by the Dark Bob available on CD or for download on cdbaby.com

'What I want from my performance is the kind of thing that a hard-core whittler might make … something I can put in my pocket and comfort me as we approach devastation.' 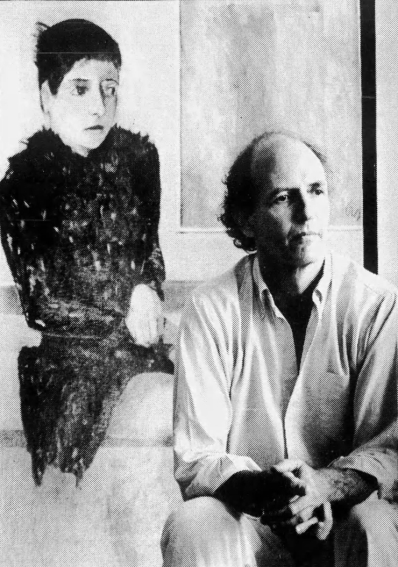 Performance artist and painter Milano Kazanjian (a.k.a. Milano Kay) died last week at his Hollywood home. He was 76.

Kazanjian was best known for his depictions of women, which L.A. Times reviewers over the years have likened to those of Sargent, Balthus and Beardsley. In January 1995, Susan Kandel wrote: “Milano Kay’s paintings of women play out Baudelaire’s notion of modernity. They have something of the eternal in them: woman as cipher, seductive and mysterious.”

Long represented by Jan Baum Gallery, Kazanjian also taught art at L.A. Valley College and did performances at LACE and other experimental venues. He moved to the produce district in downtown Los Angeles in the late 1970s, during the time that Stephen Seemayer was filming “Young Turks.”

In 1983, Seemayer and Kazanjian produced a feature film based on one of Kazanjian’s humorous and inventive performances. In “Sushi Olé!” Kazanjian has a dual role as Morales, a flamboyant art salesman, and Yamamoto, a repressed restaurant owner. Both characters fall in love with the same woman, played by artist Judith Simonian, Kazanjian’s real-life partner and muse.

After living in New York with Simonian in the 1990s, Kazanjian returned to Los Angeles, simplified his name and managed the iconic High Tower Apartments in Hollywood, which had long been owned by the Kazanjian family. Best-selling author Michael Connelly included him as a character in the 2006 novel “Echo Park”: “There was a sign that said MANAGER below a doorbell,” Connelly writes. “The door was opened before they got to it by a thin man with a white beard. He introduced himself as Milano Kay, the manager of the apartment complex.”

Reviewing a 1984 show of his paintings, L.A. Times critic Robert L. Pincus wrote that Kazanjian’s “performance work inadvertently prepared him for his present work in portraiture.”

“Morales is exuberant, fun-loving, passionate, a lover of women,” Kazanjian said of his performance alter-ego. “In constructing him, I constructed myself, defined the different things I was — and became the painter I always wanted to be.” 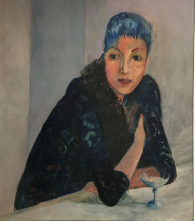 The artist's versatility on display: Painting of a woman (above) and Kazanjian in "Sushi Olé!" (right). 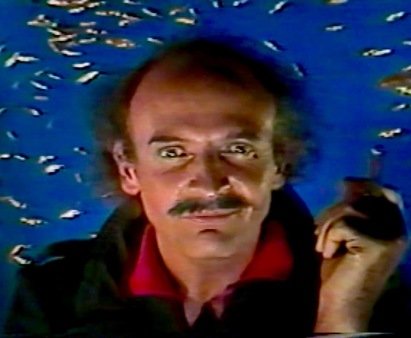 The Dark Bob on Art, Music, Punk and Posterity

'Humor is a difficult thing to juggle as a fine artist. You can be ignored for being funny. You can be criticized for it, but it’s always a line I like to walk.' 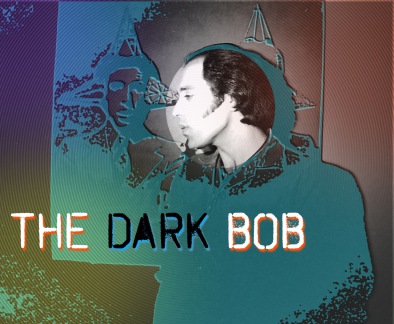 The Dark Bob is a versatile and prolific artist and musician, whose songs are a major contribution to the soundtrack of “Young Turks.” He joined Michael Delgado of A.G. Geiger Fine Art Books for the latest podcast of “A.G. Geiger Presents, Tales From the LA Art Underworld.”

As half of the seminal Los Angeles performance art duo Bob and Bob, The Dark Bob discusses the genesis of the team’s partnership in the early 1970s.

“We had a large punk audience. Our shows were attended by people who would show their love for us by spitting on us and throwing firecrackers down our suits … an expression of affection in those days.”

He also tells Delgado of the challenges of working together for decades thereafter. “There’s a reason there aren’t a lot of art teams,” The Dark Bob says, “because art is a deep expression of one’s unique neuroses. So putting two people together and trying to find that depth of personal neuroses is tricky. We just happened to click.”

Bob and Bob’s work — paintings, writing, music and performances — have always combined artistic expression with political commentary and humor. And now, the team’s files have been accepted into The Smithsonian Institution's Archives of American Art. 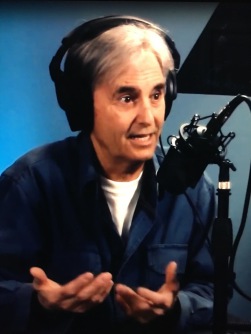 On a recent episode of Corridor Cast, Stephen Seemayer discusses his career as an artist and landlord in downtown L.A., as well as his feature documentaries — “Young Turks” and “Tales of the American” — about the genesis of the Los Angeles Arts District.

Seemayer moved downtown from the San Fernando Valley in 1976, turning an abandoned brothel on the second floor of a building at 9th & Central into a 16-room artist compound, complete with darkroom and a screening room.

As a performance artist, filmmaker, painter and photographer, his often controversial work  has been exhibited all over the United States.

His late mother, Lynne Westmore Bloom, was the notorious creator of the Pink Lady of Malibu — a monumental feat of guerrilla art in 1966 — and on Corridor Cast, he recounts  growing up with the eccentric and rule-breaking artist. 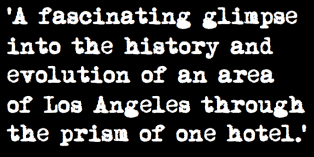 “Tales of the American” — a new documentary about the Downtown Los Angeles arts scene from the makers of “Young Turks” and Executive Producer Michael Connelly — is now available for streaming on Amazon Prime.

“Tales of the American” tells the story of the American Hotel, located at the heart of what has come to be called the Arts District. Built in 1905 as the city’s first hotel for African-Americans, the modest brick building at the corner of Traction and Hewitt has always been a haven for society’s outcasts, a magnet for colorful characters and a hotbed of creative energy.

From 1980-2001, it was the home of Al's Bar, a legendary dive featured in "Young Turks," where punk bands like Black Flag, X and Nirvana played before finding fame and fortune.

Narrated by public radio personality John Rabe, “Tales of the American” features archival photos and footage, and interviews with artists, musicians and others who lived, worked or played at the American Hotel. Filmmakers Stephen Seemayer and Pamela Wilson have captured the history of a landmark, and the free spirit of a creative community now facing the challenges of overdevelopment and gentrification.

Watch "Tales of the American" Now on Amazon Prime

Harry Bosch in the Arts District 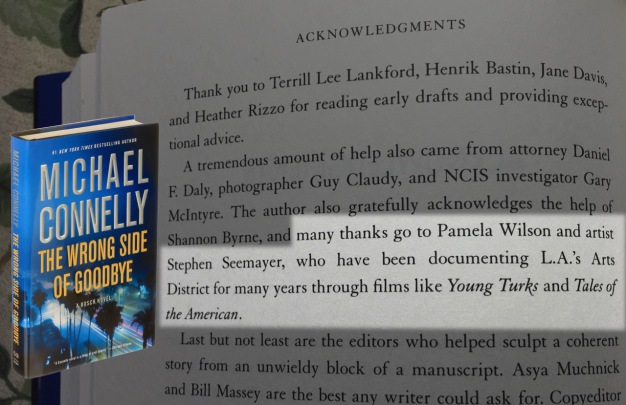 In Michael Connelly’s best-selling novel, “The Wrong Side of Goodbye,” iconic detective Harry Bosch follows the trail of his case into L.A.’s Arts District. He’s a private eye now, after being forced out of the LAPD, and his investigation draws him to Traction Avenue and landmarks such as the American Hotel and the triangle lot between 3rd & Rose.

Bosch is one of the great characters of mystery fiction, right up there with Philip Marlowe, and like Marlowe’s creator, Raymond Chandler, Connelly paints a haunting and vivid picture of Los Angeles and the Southland in all his Bosch books, including “The Wrong Side of Goodbye.” As the New York Times writes, “the settings will be etched into the Bosch road map of California life.”

Pamela Wilson and Stephen Seemayer, filmmakers of “Young Turks” and “Tales of the American,” are very proud and honored to have shared some insights with Michael Connelly in the preparation of this book.

“Tales of the American” and “Young Turks” can be viewed on digital platforms including Amazon Prime, which also is producing the TV series, “Bosch,” now filming its fifth season. 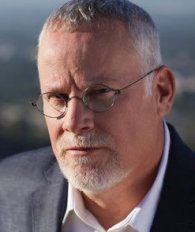 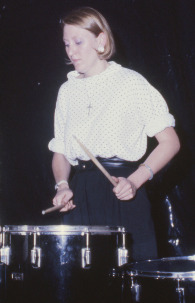 People magazine, in its style section, features an article on Gillean McLeod, who once played drums and other instruments as a member of the Party Boys, a seminal Los Angeles punk band featured in "Young Turks."

The 60-year-old McLeod, a stylist and model, is breaking boundaries in a new ad campaign for H&M swimwear. 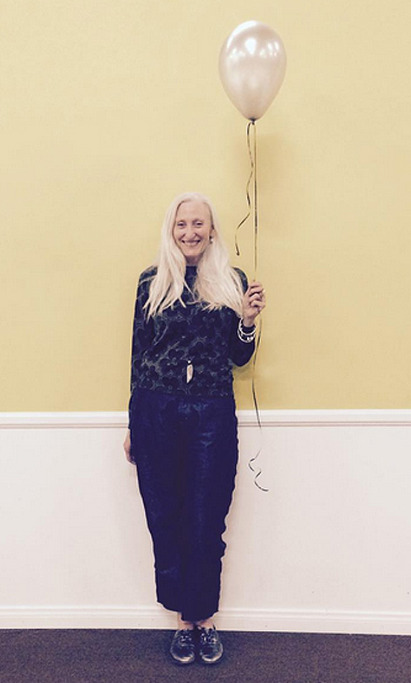 'I sort of take pride in not doing Botox or any of that face stuff. That look just seems so forced and strange to me. I am happy with the way I am. And I am here, you know? Doing a swimwear shoot today!'

In two recent articles, Los Angeles Times writer Carolina A. Miranda reminds Angelenos that there were artists, galleries and others in the Arts District before it was called the Arts District. 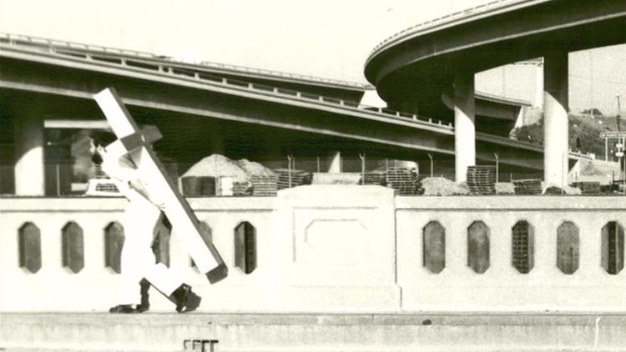 Performance artist Stephen Seemayer in a still from his documentary "Young Turks."

Stephen Seemayer, artist, filmmaker: "It was very bleak. There wasn’t crack yet. There wasn’t AIDS. But there was a sense of desolation. It was so desolate that even the cops didn’t really want to deal with you. I was 3 to 4 blocks away from the Newton Division and it’s famous in the LAPD. They were called the 'Shootin’ Newton.' I was like 22 at the time. I would be there at my studio and they’d see me out of my car and they’d roust me and said, 'What are you doing in this neighborhood?' And I’d say, 'I live here.' And they’d say, 'Get out!'" 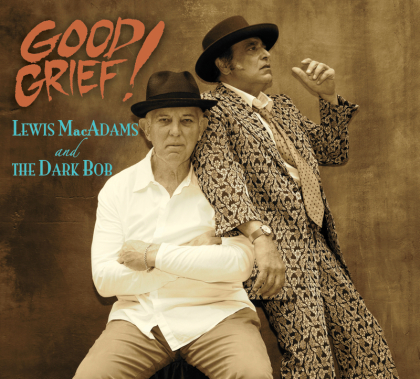